Good Friday Walk with the Cross 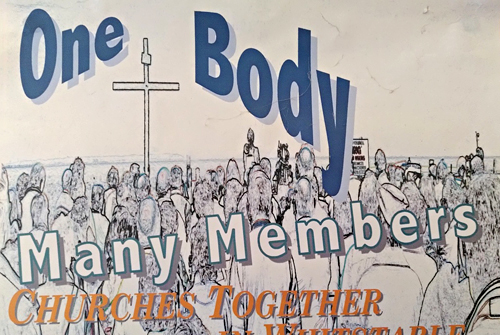 Christians of all denominations try to find ways to relive the Passion of Christ on Good Friday. Some mark the day with a walk through their town or village, with stops in specially chosen places for Bible readings and reflections. These can be very public events involving large crowds and drumming. They can also be quieter and smaller, favouring contemplation of the Word. We offer a liturgy that is suitable for all ages.

This ligurgy was used in 2019. It is given below, and can also be downloaded and printed.

Good Friday walk with the cross

Welcome notes:
We are a group of all ages. Some know lots about this story, others know little. We now travel together. With each reading, there will be thoughts and questions that come up within us. I hope we can ask out loud what our questions and observations are. At most stops I will also hand out an object.  Something to take home, and hopefully remind us of the story. We need to listen to each other.  The youngest have questions that will be as important as yours.

Almighty Father, look with mercy on this your family for which our Lord Jesus Christ was content to be betrayed and given up into the hands of sinners and to suffer death upon the cross; who is alive and glorified with you and the Holy Spirit, one God, now and for ever. Amen.

Then one of the twelve, who was called Judas Iscariot, went to the chief priests and said, ‘What will you give me if I betray him to you?’ They paid him thirty pieces of silver. And from that moment he began to look for an opportunity to betray him.

Reflection/question:
Plans for the betrayal of Jesus.
Judas is given money for betraying Jesus.  Giving advice about where he can be arrested with the least fuss.
When have we compromised our ideals.
Symbol: Coins

The Betrayal and Arrest of Jesus

While he was still speaking, Judas, one of the twelve, arrived; with him was a large crowd with swords and clubs, from the chief priests and the elders of the people. Now the betrayer had given them a sign, saying, ‘The one I will kiss is the man; arrest him.’ At once he came up to Jesus and said, ‘Greetings, Rabbi!’ and kissed him. Jesus said to him, ‘Friend, do what you are here to do.’ Then they came and laid hands on Jesus and arrested him.

Suddenly, one of those with Jesus put his hand on his sword, drew it, and struck the slave of the high priest, cutting off his ear. Then Jesus said to him, ‘Put your sword back into its place; for all who take the sword will perish by the sword.

At that hour Jesus said to the crowds, ‘Have you come out with swords and clubs to arrest me as though I were a bandit? Day after day I sat in the temple teaching, and you did not arrest me.

Then all the disciples deserted him and fled.

Reflection:
When people threaten us, are horrible to us, do we always need to use violence to stop them?
What is another way?  Talking, making friends?
Symbol: Sharing Peace?

The Trial of Jesus

Now the chief priests and the whole council were looking for false testimony against Jesus so that they might put him to death, but they found none, though many false witnesses came forward. At last two came forward and said, ‘This fellow said, “I am able to destroy the temple of God and to build it in three days.” ’ The high priest stood up and said, ‘Have you no answer? What is it that they testify against you?’ But Jesus was silent. Then the high priest said to him, ‘I put you under oath before the living God, tell us if you are the Messiah, the Son of God.’  – You have said so.

Now Jesus stood before the governor; and the governor asked him, ‘Are you the King of the Jews?’ Jesus said, ‘You say so.’ But when he was accused by the chief priests and elders, he did not answer. Then Pilate said to him, ‘Do you not hear how many accusations they make against you?’ But he gave him no answer, not even to a single charge, so that the governor was greatly amazed. While he was sitting on the judgement seat, his wife sent word to him, ‘Have nothing to do with that innocent man, for today I have suffered a great deal because of a dream about him.’

Reflection:
Why was Jesus silent?
When have I mocked or ridiculed others?
Symbol: Tape – mouth shut?

Then the soldiers of the governor took Jesus into the governor’s headquarters, and they gathered the whole cohort around him. They stripped him and put a scarlet robe on him, and after twisting some thorns into a crown, they put it on his head. They put a reed in his right hand and knelt before him and mocked him, saying, ‘Hail, King of the Jews!’ They spat on him, and took the reed and struck him on the head. After mocking him, they stripped him of the robe and put his own clothes on him. Then they led him away to crucify him.

The Death of Jesus

From noon on, darkness came over the whole land until three in the afternoon. And about three o’clock Jesus cried with a loud voice, ‘Eli, Eli, lema sabachthani?’ that is, ‘My God, my God, why have you forsaken me?’ When some of the bystanders heard it, they said, ‘This man is calling for Elijah.’ At once one of them ran and got a sponge, filled it with sour wine, put it on a stick, and gave it to him to drink. But the others said, ‘Wait, let us see whether Elijah will come to save him.’ Then Jesus cried again with a loud voice and breathed his last. At that moment the curtain of the temple was torn in two, from top to bottom. The earth shook, and the rocks were split. Now when the centurion and those with him, who were keeping watch over Jesus, saw the earthquake and what took place, they were terrified and said, ‘Truly this man was God’s Son!’

Be the first to find out when our next walk will be.